Flat people give unprecedented depth? Indeed, they do! Billboards or flat planes with projected texture and alpha mask create an illusion of 3D objects, while in reality–these are completely flat items. This technique was first invented decades ago and used in popular games such as the original Doom from 1993. Back then, all monsters and people in games were created using billboards, while the rest of the scene was real 3D.

Even today, this technique is used extensively in modern games, to enhance the environments with minimal impact on processing power. If you take a moment and stop by foliage in today’s games, you’ll notice that lots of details are indeed flat items. Another useful area for billboards is smoke, glow, fog and fire effects. Billboards are also used in 3D props and models, and can also be used to enhance your 3D scenes.

Like With Any Technique, There Are Some Downsides To This Approach.

One of the issues is that these items are flat, and because of that, they look flat when looked at from the wrong angle. To counter this, game makers auto turn the flat items, so they never look flat. This causes the items to follow the camera, and it can look quite funny at times.

Another issue is shadow projection. When using sharp shadows, you’ll sooner or later run into issues of the flat items casting incorrect or no shadows, since they are facing the light source with their flat side. All these small limitations aside, billboarding is a superb tool for flooding your scenes with many items, while keeping the memory and graphical processing power down to a minimum. 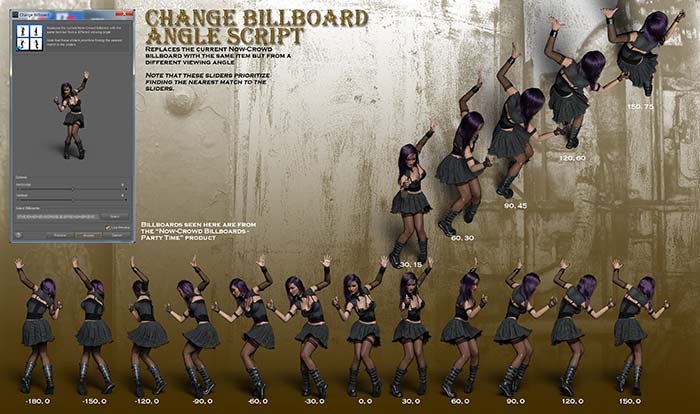 You get the exact same benefits and problems when using billboards in a 3D scene, and in the video, we’re taking a closer look at Riversoft Art’s Now-Crows Billboards – Modern City Life for DAZ Studio.

First of all, this is a HUGE package. 15 Gb unpacked size, and 15 ZIP files, almost 1 Gb each. You get icons for loading the various pre-rendered people and also control icons for rotating the people (they are pre-rendered with lots of camera angles) and also for rotating and aiming the billboards themselves.

What really surprises me, is that there are no Iray specific billboards. Instead, they load with standard 3Delight surface materials. Of course, you can still render them using the Iray render engine, but you can’t actually add Iray materials since the rotate script will stop working. This is a small downside since I found the billboards a little pale overall, and being able to use emission for self-glowing / ambient light is important for making these flat items match the rest of the scene.

Overall, a great package with lots of value, and great pre-rendered people, but I’d love to see more Iray specific options, like emission control and the script being Iray surface compatible.

Check it out in the DAZ store HERE.