Who doesn’t love fantasy scenes, castles and anything that has to do with Elves?

So, I immediately grabbed this on sale at DAZ, and in today’s video, you’re going to find out whether this is something you should grab or avoid at all cost.

The prop itself looks sassy in the promo images and comes with lots of additional texture add ons, looks, light presets and whatnot. While the scenery is absolutely gorgeous, the prop itself is a 450k+ polygon massive 3D model, which can cause issues when used in conjunction with a few high rez female or male models.

The 450k+ figure was from the OBJ export, loaded into Lightwave, but since it didn’t export with the “copied” instances and only showed around 1/8th of the entire model, it’s more likely that DAZ Studio Iray battles around 3.6 Million polygons. I’m not 100% sure how DAZ Studio handles instances technically since they are no real copies, but it’s still a heavy prop.

The difference between the low rez and high rez versions doesn’t affect the polygon count, which I find awkward. A low rez version should have fewer polygons. Texture-wise, it looks quite good, but the landscape / surrounding rock formation is far too low rez regarding both geometry and textures. 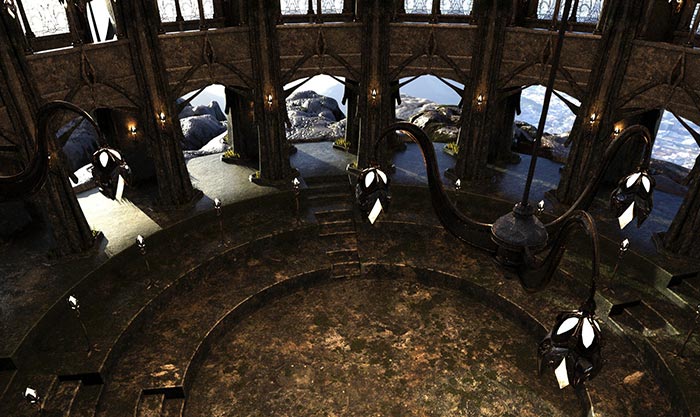 The Sylph Pavilion high rez model loads with lots of 4k and 5k textures, while the low rez uses 1k and 2k textures. I couldn’t even get an Iray preview to show up on my 16 GB RAM system with a single GTX 1080 GPU. DAZ Studio became un-responsive after 20 minutes of waiting, so I had to restart. The low rez version loaded fine, but it’s still a heavy beast to render, due to the high polygon count.

DAZ Studio jumped out of GPU mode immediately and started to render using CPU only, which is a big no-no. I’d love for this prop to be more optimized, and use more tiling textures and include loadable sets or junks of the full geometry. Yes, you can remove some parts when it’s fully loaded, but you have to load the entire 450k polygon model first. 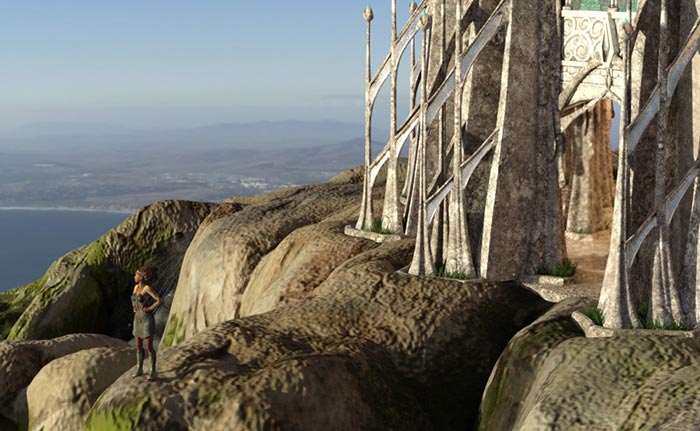 There are lots of fun functions, icons to change lights, load render presets, various scene pre-loads as well as some limited individual pre-loads and such, but because I couldn’t use the high rez version, I felt I lost some of the value the package has to offer. Furthermore, because of the high polygon count, the preview display is quite lagged and it makes it difficult to select camera angles. Unless you have 24 Gb of system RAM, and one or two GTX 1080ti’s, this set is very heavy to use, and you might only get away with the low rez version, and use CPU rendering only, unless you’re willing to manually optimize the prop, remove some textures, remove parts of the prop or make some “distant” textures low rez.

It’s a pity since I really like the geometry and the looks of it.

If you want to purchase this set at DAZ, here’s the link HERE.

Keep doing what you love,

P.S. Grab this at DAZ HERE.

6 Replies to “The Sylph Pavilion for DAZ Studio – Review”